Signs are not required to inform visitors they have entered Badlands National Park. Anyone remotely familiar with what to expect from the terrain of the Badlands will know the distinctive castle-like formations of these mountains on sight. My first reaction to the view shown below was a loud and enthusiastic, “Oh… Wow…”

Driving into the Eastern portion of the park from Rapid City, SD, I was also immediately struck by how few cars accompanied me along the windy and breathtaking road.  Compared to Wind Cave National Park and especially Mount Rushmore National Memorial, Badlands National Park receives starkly few visitors each year, which is a shame for those missing out and a boon for those opting to make the journey.  At 9:00 a.m. on an early August day, a Park this grand in a country this drunk on National Park Centennial and Solar Eclipse fever should be packed to the gills with eager hikers.  I smiled to myself upon my arrival at the Castle Trailhead.  A 5.1 mile trail (each way; 10.2 miles in total) beginning near Interior, SD and heading into the most surreal section of the park.

Badlands National Park is considered more of a driving park than a hiking park, and many of its visitors, albeit few in total, drive the 2+ hours from Mount Rushmore on a family vacation or retirement road trip to drive along a portion of the main road of the Badlands.  Upon my arrival at the Castle Trailhead, only one other car sits in the parking lot.  I watched as two college-aged young men tie bandanas around their sun-darkened foreheads, lace up their well-worn boots, and hit the trail with a degree of confidence and ferocity that reassures me that I won’t be running into them much on the trail.  I am desirous of solitude this morning, and their quickened pace will facilitate this outcome.  Lathered up in sunscreen and bug spray, I embarked down a short flight of old wooden stairs caked in mud.  I should mention at this time that during most of the two-and-a-half-hour drive from Wind Cave to Badlands, the sky had seen fit to alternately rain lightly and moderately across the southwestern South Dakota plains.  To my great delight, the rain subsided just as I reached the park boundary, and I was excited to enjoy a dry yet cloudy morning hike.  The Badlands provide no cover from either rain or sun, and if caught unprepared for either, a hiker could quickly run into trouble.  Confident (perhaps overconfident, as we will later reveal) in my luck and ability, I strode into the Badlands without a second look at the sky above me.  How could any outcome take away from this otherworldly view?

Within 20 minutes I’d lost the path.  Remarking aloud that if this hiking trail was so difficult to follow, ‘How on Earth did early explorers and settlers navigate this landscape?’, I backtracked until, picking up the correct route again, I began the 10-mile hike in earnest.  The backdrops along the Castle Trail look as if created for the sole purpose of serving as set pieces for an episode of Star Trek:  The Original Series.  Had there been any point in my life where I would not have batted an eye at the prospect of an away team of Enterprise crew members suddenly beaming down next to me, this would have been it.  Based on the literature I’d read on the Park, the geology in the Badlands is unique on Planet Earth; reason enough for interstellar explorers to beam on down for a look.  It is somewhat hard to believe that anything would flourish out here amongst the low grasses, high castles, and seemingly endless stretch of rock and dirt, but to coin a hackneyed yet appropriate phrase, life finds a way. 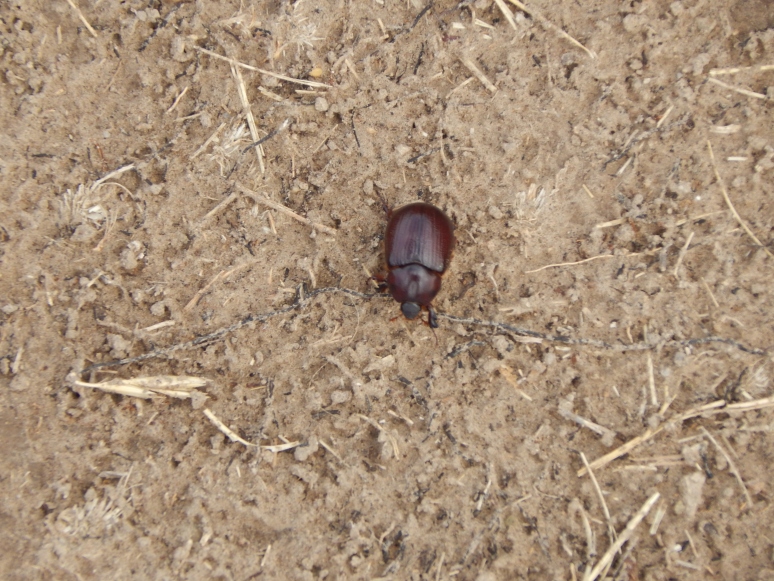 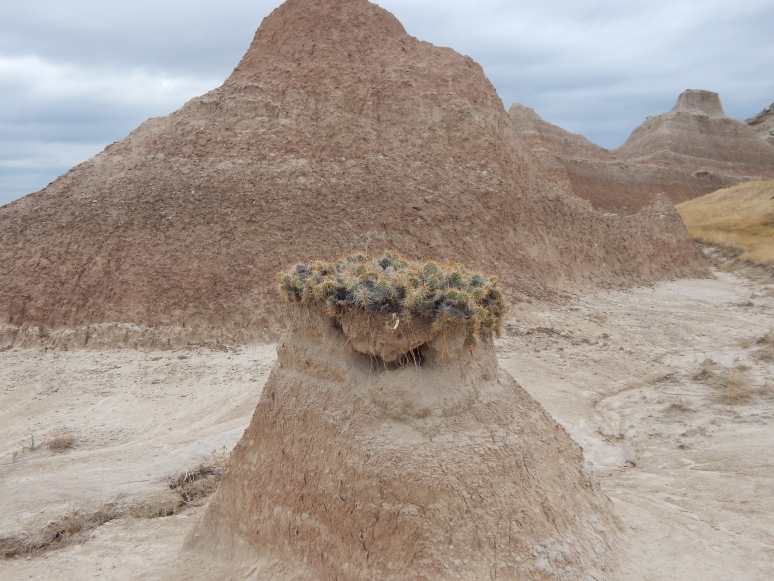 While driving up to the trailhead, I knew I had gone increased my elevation, as it was mostly uphill, but it did not completely dawn on me just how high up the trail stretched until I reached a cliffside about two miles into the hike.  This was also the time that I realized my folly in neglecting to pack any rain gear.  Dark clouds brewed in the distance like a storm over the peak of Mt. Doom, and the fleeting thought occurred to me that, if caught out on the plain alone in a thunderstorm, my best-case scenario was to be soaked to the bone with a waterlogged camera and my worst-case scenario was to be struck down by lightning just two days into my four-month journey.  Talk about anti-climactic…

Soldiering on, I passed a young family heading in the opposite direction, but who had arranged for a pickup at the first trailhead so as to only need to hike 5.1 of the 10.2 miles of trail.  They would assuredly outrun the storm.  I, however, was committed to the full trail.

I reached the turnaround point at the opposite trailhead 15 seconds before an ominous thunderclap echoed across the plain, sending a deep shiver down my spine and causing me to question the entirety of my trip.  Was it worth it to drive halfway across the country just to be electrocuted in South Dakota?  I hastily reminded myself that my alternative was returning to my desk and responding to marketing emails, and quickly about-faced with renewed vigor:  I would outrun this storm.

The 5.1 mile distance that took me two hours to complete on the way out, as I stopped to admire the view, take photos, and generally meander across the Badlands, was traversed in 63 minutes on my return trek.  From the trailhead where I began the hike, the dark clouds could not be seen behind the castle formations, and I successfully warned a solo hiker in her mid-50s about the impending danger she would have met head-on.  “Thanks for letting me know – I’m dying for a Diet Coke anyway!”, she replied turning around after a moment or two to soak in the sublime views. 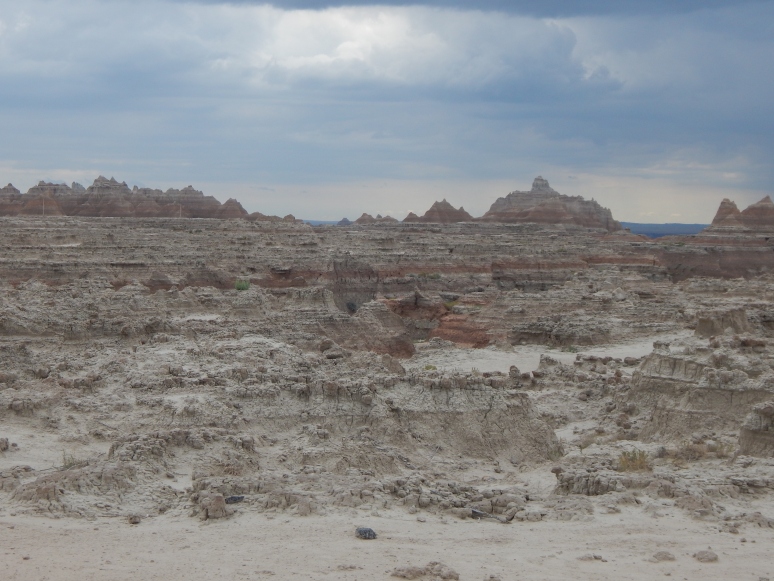 Cracking the mud off the soles of my Merrells and throwing my pack into my trusty Crosstrek, I departed Castle Trail none the wetter but all the wiser for my experience.

I found the drive west through the park to be busy and congested.  It was now about 12:30 p.m., and the drive-only tourists were out in force.  As they set up tripods to photograph areas of the park that I had just traversed on foot, I grew more and more pleased with my decision to complete the hike and took a mental note that it is better to risk lightning for an experience at 26 than to yearn for that experience from afar at 76.

Eschewing the main highways on my return drive to Wind Cave, where readers of my previous post may recall that a damp tent awaited my arrival, I endeavored to test the Crosstrek’s mettle with a 30-mile stretch of dirt road across the eastern Badlands.  It was handled like a champ, and in addition to a filthy car and a high-adrenaline, low-MPG drive, I stumbled upon an endless field of sunflowers, stretching for miles in every direction.  So close to the desolation of the Badlands and looming storm clouds, this incredible collection of picturesque plant life overtakes the landscape.

Capping off the day with a slice of Strawberry Rhubarb pie at the Purple Pie Place in Custer, SD shortly thereafter (see the full review in the ‘Pie’ section of this blog) made for a memorable and enriching experience at Badlands National Park.